Sorry, Party People.  Heinrich put the hatchet in most of my Abduction Weekend updates.  He says he wouldn’t mind if I was writing exclusively about himself, but there were three other gentlemen involved in addition to the people whose house and property he utilized for the event.

They took me out of the closet and stood around the room while Heinrich conducted an intake interview.  He was in fine form–when I tried to get chummy with him, he acted like he didn’t even know me.  As if we were not friends and had no history together.

I was made to immerse myself up to my neck in a large stainless steel sink filled with cold water.  They threw in a bucket of ice after a few minutes.  It was very difficult to concentrate on my answers with my nose running and ice cubes bouncing merrily upon the surface of the water.  Heinrich asked me mindfuck questions, such as “How obedient do you think you are?”

Overall, I did quite well on the first rule.  My compliance with the second rule was mediocre, I regret to report.  It did improve markedly over time, however.

I was affixed with a heavy metal shackle on my left ankle.  I have no idea where he procured it, but let me tell you, he wasn’t fooling around.  It was heavy, it closed with a masterlock, and there was twelve feet of chain attached to it.  It looked a bit like this: 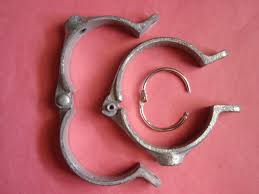 Real, heavy chain.  Not the crap you buy at the hardware store to hang your potted plants.  It weighed several pounds and was smooth-plated so that it didn’t scratch the floors or furniture.  I wore the shackle and the chain every second I was there.  It was either held by a man or affixed to something heavy and/or permanent the entire time.  I was also charged with keeping it clean, so that the links didn’t drag dirt inside when I was eventually let into the main house were the real human beings were.  Yeah, I was constantly washing that chain and clanking around in it like Marley’s ghost.  It made a sore by the end of the weekend.

I was also made to wear a length of chain around my neck, which was also locked with a padlock.  This was very uncomfortable and I had to sleep in it the first night I was there.  My hair would get caught in it and it would pinch my skin.  Dudebro said that I could get out of the collar if I found the key to the lock, which he hid somewhere in the studio I was being kept.  Heinrich took out his stopwatch and timed my frantic search for the key.  They watched it indoors on the security camera.  I hear that they found it very amusing.  It took me eighty-eight minutes to find that key.  And you know that meant I had to endure eighty-eight of something.   Oh Heinrich, you are truly the Frederick Taylor of pain and suffering.

Incidentally, the shackle/chain/collar combo were the only things I was allowed to wear all weekend, except for the sneakers I was permitted for the execution of hard manual labor.  I was made to dig a great big hole in which I became convinced that I was going to be buried alive in a crate.  They did not bury me alive, but they did make me fill in the hole after I digged it.  I will add that I was humiliated and terrorized with the garden hose throughout the weekend.

I was also made to drag a bunch of sheet rock out of the bottom of an empty swimming pool.  Heinrich timed that, too. My puny-ness and ineptitude was a constant source of speculation and entertainment.  I mean, they watched me like they’d never seen a girl dig a hole before.  Probably because they hadn’t.  Ha, ha.

Dudebro harassed me constantly and the other men got a kick out of basically tormenting me.  Some of it was on the level of kids playing keep-away with the nerd’s hat or snapping the girl’s brastrap, which sounds harmless enough except that it became exhausting and frustrating after a while.

Yes, I cried.  My tears were met with indifference or ridicule.

One of the men, Mr. White, was pretty soft.  I guess he was the Good Cop in the routine.  He would feed me.

Oh yeah–the first day I was there, I had to drink out of a bucket.  Without using my hands.  That was fun. *sarcasm*

The owners of the house owned a huge male weimerainer dog that I was made to shampoo and groom after it had been running in the fields all day.  Heinrich was big on not tracking dirt in the house.  Usually I would be delighted to interact with a beautiful dog like that, but the men stood around and observed me silently the entire time.  This had the effect of making me very paranoid (which I’m sure was the point).  I suddenly became fearful that they might ask me to mess with the dog.  Relax, of course they didn’t, and I would not have done it if they did, but I was still worried.  I did not know any of the men except for Heinrich.  They could have been complete pervs, for all I knew.

The dog could do tricks.  Roll over, beg, speak, turn in a circle. Mr. White thought it would be fun to make me do tricks.  I had to compete with the dog to do the tricks faster.  It goes without saying that I always lost, because I am clumsy and the dog was not.

They made me eat a piece of bacon that I thought was a dog treat.  I did not want to eat it, but I did.  It was, in fact, human food.

Heinrich was the only sadist in the bunch. The others just were not very interested in causing me pain–they were more into playing mean jokes on me, entertainment, and sex.  Heinrich made me suffer.  He told me he would, and he did.

I have to hand it to him.  He followed through.  No mercy.  The only time he gave me a pass on anything is when I brought him his beer in the bottle instead of pouring it into a glass first. When he said I earned eighty-eight, he administered eighty-eight.  He was hard on me, and did sick shit like make me choose between options that I both thoroughly despised.  For example, I absolutely cannot stand nipple clamps, and the only man I ever let hurt my breasts was the Surgeon.  I just can’t cope with that sensation.

Well, it was seven minutes of the clover clamps, or else I had to sleep in the closet.  Sitting up in the closet.   While he watched me on the security camera (did I mention that I had no privacy the entire weekend?  NONE!).

I hated the options and I hated being made to participate in my own oppression, but what could I do?  I took the clamps and it absolutely killed me.  I do not lie when I tell you that I would rather take bastinado than clover clamps.  I normally won’t even let men touch me there, even boyfriends.

I actually screamed when he took them off.  He was standing behind me with his arm wrapped around me, sort of like a headlock, and his voice was in my ear.  I could see his face in the mirror, and he was smiling.  I’ll never forget it.  I could feel his hard on through his pants.  I was crying and he counted slowly in German backwards from ten and then took the clamps off and I thought the pain was going to kill me.  Stars, boy, I saw stars.

Then he put me on top of the desk.  The desk can a mechanical clamp attached to it, like this: 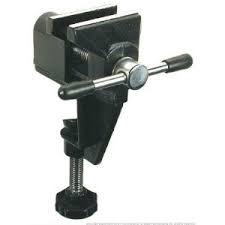 He put my hair in the clamp so that I couldn’t move my head or get up.

Then he fucked my brains out while I was crying and blowing snot bubbles and generally being pathetic.  Nobody’s done that to me since the Surgeon, either.

It was one of the hottest experiences of my life.

He didn’t even take off his pants.  He just shrugged off his suspenders and opened his pants.  He was wearing his boots, man, and he looked fucking beautiful.  Then he put his hand in my mouth and laughed at me.

My mind was so blown that I forgot to ask permission to climax.  Can you believe that?  I never forget.  And you better believe I was punished for that, too.

I need a cigarette and a cold shower just writing that.  God, I try not to get pornographic on my blog and keep everything rated “R”, but I just couldn’t resist the description.

When he finished with me (we were alone), he threw me to the wolves.

It was a long night.

And oh yeah–on the last night we were there, the guys played cards and it was my job to serve drinks and empty ashtrays.  I spent a lot of time serving them when I was finally let inside the house.  And before we left, I had to clean the house and change the linens so that the house was perfect for when the owners came home.

After three days, they dropped me off at my apartment in one piece.  I waddled up the stairs and collapsed.  I couldn’t wear jeans or tight pants for a week, but it was totally worth it.