Yesterday I had a session with a Swede.  That’s a first for me.  He was pleasant, with a calm, gentle demeanor.

He wanted a bondage session.  I’ve been avoiding those since the Mathematician because it makes me remember hurt feelings, but yesterday I decided I was ready to do it again.  I got through it just fine and actually had quite a bit of fun with it.

I’m not as quick with the rope as I’d like to be, but I still managed to get him into four different positions over the course of the hour (sanitizing and re-bundling all that rope afterward was a bit of a chore, though).

The best part was when I had him tied standing up to a post, with his arms behind him.  It looked pretty awesome.  I was standing across the room admiring my handiwork when inspiration hit.

“Saint Sebastian!  The martyr!  He was killed with arrows.  Hold on, I’ll be right back.”

I ran out of the room, probably causing the fellow a little distress, and went to the supply closet.  There, I found one of those children’s toy bow-and-arrow sets with suction cup arrows (I have no idea what it’s doing in there, but it’s been around forever):

Eventually, I got em all on him.

Alas, he wouldn’t let me.

After the session, I fetched my laptop and looked up images of Saint Sebastian to show him.  I figured maybe he was unfamiliar with Sebastian because the Swedes are protestants.

He peered at the screen and laughed: “That’s very funny.  But gruesome, no?”

“Only if you use real arrows.”

Well, I suppose…but it certainly commands one’s attention.  Besides, Catholicism is gruesome.  Lots of masochism in Catholic art.  Lots and lots. 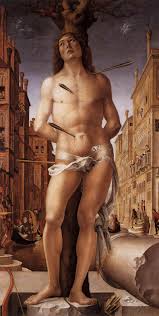 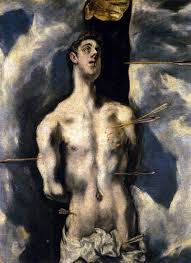