This stupid video made me laugh so hard!  My favorite montage was the kitties with the dinosaurs.  The song is terrible, but fitting.  For some reason, it reminds me of the Pet Shop Boys.

What is your favorite dinosaur?  Everyone has a favorite dinosaur.  My favorite is Triceratops.  SO COOL!  Oh my god!  I wish I could have seen dinosaurs!  They were SO BIG!  I wish we could see them walking down the street!  A dinosaur parade!  Why isn’t science cloning these motherfuckers?  Jurassic Park was like twenty years ago!  Get with the program, science!  I would totally pay to attend a dinosaur reservation park!

I also like the Dimetrodon.  Dimetrodon was not a dinosaur, but a pelycosaur, which means that he was a mammal-like reptile!  He lived 280 million years ago.  That is way before my homie Triceratops.  When I hear “280 million years ago” it means almost nothing to me because I can’t really comprehend that much time. It’s too big.

Dimetrodon was 11.5 feet long and weighed 550 lbs and he was a carnivore, which means that he would eat humans.  I bet he could kill an elephant or a polar bear.  Can you imagine getting eaten by Dimetrodon?  What a badass! 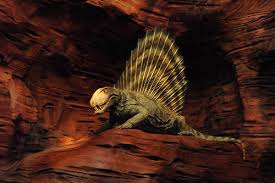 What I think are very underrated, though, are extinct Ice Age creatures…the giant sloth, for instance.  I would like to see an extinct Ice Age mammal parade, too.  Might be hard, though, because they were not domesticated and thus would not obey commands.

One of my favorite films is a Werner Herzog movie called Cave of Forgotten Dreams.  It’s about a cave in southern France that is full of cave-person art.  The art is 32000 years old, and it is so beautiful.  It is so beautiful that one day when I have a bigger apartment and more room on my walls I am going to put up reproductions of it
. 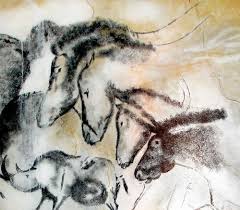 The humans who made this art were obsessed with other animals.  As it should be.  When I look at the art, I get the feeling that the people felt very small in the world.  Not like today.

They must have loved them.  Animals possess such great spiritual power.

One thing that strikes me when I consider ancient art, such as Egyptian art, is that in the human conception, there was no barrier between the physical world and the spiritual world or the afterlife. It was sort of like the world was haunted, all the time.  The concept of time was different.

Why didn’t I devote my life to studying dinosaurs?  It would be more fun, and the money couldn’t possibly be worse!

My friend saw this post and asked me if I was stoned when I wrote it.  lol.  NO.