I finally got off my ass and and watched The Innocence of Muslims, the film that inspired riots and demonstrations around the Muslim world.

That’s why I’m writing about it on my blog: I honestly don’t get it.  Maybe someone can explain it to me.  Do you get it?  What’s the big deal?

Here, take a look.  The first two minutes, incidentally, are the best.  It gets very bad very fast.  Check out those special effects in the middle!  lol  And I had to watch it twice because I couldn’t make sense of the plot the first time.  It was that incoherent.


Yeah, as far as propaganda goes, this sure ain’t Jud Suss.  I did keep thinking about all of those 1950s Bible epics while I was watching Innocence, though, and asked myself why.  After a minute, I realized: almost all of the characters are white dudes wearing suspiciously clean clothes.  Not historically accurate, but kind of amusing.  Like the portraits of Whitey McWhitebread Jesus Christ that were hung on the walls in my old Catholic school:

In those paintings, Jesus kind of reminded me of the male model Fabio, who did all of those I Can’t Believe It’s Not Butter! commercials: 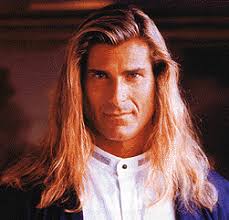 Remember when comedian Tom Green dropped by Fabio’s house and asked for a tour?  HILARIOUS!  Fabio actually came across as a pretty chill guy.  He was modest in the interview and quite friendly…hmmm….let me check YouTube….

This video is waaaaay more entertaining than The Innocence of Muslims.  I suspect that most of the rioters haven’t even seen the film.  If they watched it, they would know that there was no reason to get so upset.

I don’t want to get too political here and offend any of my readers, but seriously: I think the sort of people who would burn an embassy over a comically bad video like this one have some sort of major inferiority complex going on.  They get so mad because they think that they’re being made fun of.  The only people that movie humiliated were the dummies who made it.

Well, in the spirit of the video that inspired this blog post, I see that my narrative has rambled…I’m going to post it anyway because everyone deserves to see the Fabio house tour.